Ha Long Bay is located in the northeastern part of Vietnam and constitutes part of the western bank of Bac Bo Gulf, including the sea area of Ha Long City and Cam Pha Town and part of Vân Don island district. It abuts Cat Ba Island in the southwest. Toward the west is the shore with a 120 km-long coastline. It is located within 106o58’-107o22’ east longitude and within 20o45’- 20o50’ north latitude. The site is 1553 sq. km with 1969 islands of various sizes, of which 989 have been named.
The islands in Ha Long Bay are mainly limestone and schist islands most lying in the two main areas: the southeastern part of Bái Tử Long Bay and southwestern part of Hạ Long Bay. These islands represent the most ancient images of a geographical site having a tectonic age of from 250 million to 280 million years. They are the result of many times of rising and lowering processes of the continent to form a karst. The process of nearly full erosion and weathering of the karst created the unique Hạ Long Bay in the world. In a not very large area, thousands of islands with different forms look like glittering emeralds attached to the blue scarf of a virgin. The area where many stone islands concentrate has spectacular scenes and world-famous caves and is the center of Ha Long Bay Natural Heritage, including HaLong Bay and a part of Bái Tu Long Bay.
The area is recognized as the World Natural Heritage that is the area of 434 sq. km with 775 islands. It looks like a giant triangle with Ðầu Gỗ Island (in the west), Ba Hầm Lake (in the south) and Cống Tây Island (in the east) as its three angle points. The nearby area is the buffer area and areas classified as national beauty spots in 1962 by the Ministry of Culture and Information.
Viewed from above, Hạ Long Bay looks like an extremely vivid huge drawing. This is a wonderful and skilful masterpiece of the Creation and of nature that turns thousands of dumb soulless stone islands into fantastic sculptural and artistic works of various graceful shapes, both familiar and strange to human beings. Thousands of islands emerging uneven in the fanciful waves look strong and magnificent but also mild and vivid. Amidst these islands we feel as if we were astray in a petrified legendary world. There are many names given to islands according to their shapes and forms. This one looks like somebody heading toward the shore: Hòn Ðầu Người (Human Head Island); that one looks like a dragon hovering above the sea surface: Hòn Rông (Dragon Island); another looks like an old man sitting fishing: Hòn Lã Vọng; some look like big sails struggling amidst the wind to set off for the sea: Hòn Cánh Buồm (Sail Island); then two islands look like a pair of chicken lovingly playing with each other above the sea: Hòn Trống Mái (Male and Female Chicken Island); and amid the vast sea stands an island like a big incense burner like a ritual offering to Heaven: Hòn Lư Hương (Incense Burner Island). All are so real that people are taken aback by them. Those stone islands have experienced unpredictable changes over time and they take different shapes from different angles of view. Here, we come to realize that they are not dumb inanimate things but are vivid and soulful. 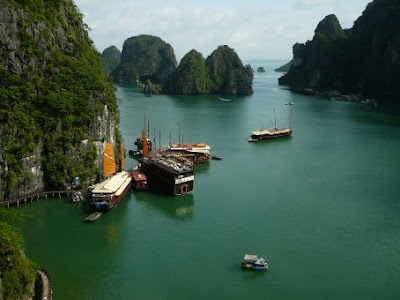 Halong bay
Inside the stone islands are various breath-taking caves, such as Thiên Cung, Ðầu Gỗ, Sửng Sốt, Trinh Nữ, Tam Cung and others. These are really magnificent palaces of the Creation on earth. Long ago, Hạ Long Bay has been called by the great national poet Nguyễn Trãi:“a wonder of the earth erected towards the high sky”. Many men of letters from all over the world have been taken aback at the grandiose scenery of Hạ Long. They seem to get puzzled and incompetent as their treasure of vocabulary is not rich enough to depict the splendor of this place.
Hạ Long Bay is also attached to glorious pages of Vietnamese history, with famous sites such as Vân Ðồn, a bustling trade port in the 12th century, charming Bài Thơ Mountain, and not very far away from here is the Bạch Đằng River which witnessed two famous naval battles of the Viêt’s ancestors against invaders. Also, Hạ Long is one of the cradles of human kind with the glorious Hạ Long culture in the late Neolithic age, discovered at such archeological sites as Ðộng Mang, Xích Thổ, Soi Nhụ and Thoi Giếng.
Hạ Long is also home to great biodiversity with typical eco-systems like mangrove forest, coral and tropical forest. It is also home to thousands of plants and animals of numerous species, for example shrimp, fish and squid. Some species are particularly rare and can be found no where else.
With such special values, at the 18th Session of UNESCO’s Council of World Heritage held on 17 December 1994 in Thailand, Hạ Long Bay was officially placed on the list of the World Natural Heritage. In 2000, UNESCO recognized it as the World Heritage for the second time for its geographical and geomorphologic values. This confirms the global premier value of Hạ Long Bay.
For more information Please contact us:
Anviet Art travel Co., LTD
Address: No 69 – F3 Daikim, Hoangmai District, Hanoi City, Vietnam
Phone: +84.436410 133
Fax: +84.436410 131
Mail: arttravelway@yahoo.com ; dulichanviet@gmail.com
Website: http://dulichanviet.com
Người đăng: dulichanviet.com vào lúc 22:03 Không có nhận xét nào:

Halong bay information - Scorched Beach (Bai Chay)
Upon arriving in Ha Long city, the visitor will be driving along 'Bai Chay' or scorched beach. The sand on this stretch of beach is dark. And judging by the name the visitors may mistakenly think that this is due to the dry climate or lack of wind in this area. However, contrary to this interpretation, the area is quite pleasant during the summer and fall months and the temperature here is around 70 deg F. According to the locals, Bai Chay got its name long ago, based on another historical event. Bai Chay was once a forest. In 1287, the Mongols led by the great Truong Van Ho,(a Vietnamese name for this Mongolian general) attacked Vietnam and was driven back by general Tran Khanh Du. Many Mongolian ships were set afire and drifted to shore aided by high wind setting the forest on fire. Since then this stretch of beach became known as Bai Chay or scorched beach.

From Bai Chay, visitors can hire a boat and go out to the bay. It is here that visitors will be find some of Southeast Asias most fascinating sites. Visitors to the bay speak highly of its almost mystical qualities and the surrealistic scenery that defines this bay. The limestone formations are both bizarre and awesome. Over thousands of years the base of many of the formation have corroded

to a point where many seem to be balancing on thin air. The shapes and the positioning of these formations often resemble people, animals etc., hence, most are given a name by the locals. Some of the more famous are: Hang Dau Go ( Wooden Stakes cave), Hang Bo Nau (Pelican cave), Hang Trinh Nu (the Virgin), Hang Sung Sot (Cave of Awe), Dong Hang Hanh, Dao Tuan Chau (Sentinel Chau Island), Qua Chuong (the bell), Con Voi (the elephant) etc.. Now, about one thousand formations have names. One can't possibly see all of Ha Long grandeur in one day or even a month since depending on the time of the year, the weather, or the condition of the bay the visitor may see only one small aspect of Ha Long's beauty.

The end of the Vietnam war, and the advent of "Doi moi", Vietnam's policy of opening its economy to foreign trade, means that Westerners and South Vietnamese now have a chance to visit Ha long. Vinh Ha Long or Bay of the Descending Dragon is often touted by proud Vietnamese as the world's Eighth wonder. One of the main attractions of Ha long is the bay's calm water and the thousands of limestone mountains dotting the seascape. The Bay's water is clear during the spring and early summer. Some of the islands are quite large and there are small alcoves with sandy beaches where swimming is possible. Ha Long bay lies in the northeastern part of Vietnam and is 165 Km from Hanoi.

Ha Long literally means descending dragon(s) and according to local myth, the story goes as follows:

Long ago when their forefathers were fighting foreign invaders from the north, the gods from heaven sent a family of dragons to help defend their land. This family of dragons descended upon what is now Ha Long bay and began spitting out jewels and jade. Upon hitting the sea, these jewels turned into the various islands and islets dotting the seascape and formed a formidable fortress against the invaders. The locals were able to keep their land safe and formed what is now the country of Vietnam. The Dragon family fell so much in love with this area for its calm water and for the reverence of the people of Vietnam that they decided to remain on earth. Mother dragon lies on what is now Ha Long and where her children lie is Bai Tu Long. The dragon tails formed the area of Bach Long Vi known for the miles of white sandy beaches of Tra Co peninsula (see map).